Melissa McConaghy 11/06/2021
0 Comments
“Parkinson’s is a challenge that makes my life interesting”
Julio… what an inspiration. I love your approach and support of everyone in the Tribe. Thank you for your refreshing approach to thriving with Parkinson’s. As a reminder, Julio was the January Spirit Award winner. To listen to Julio’s story and more about his upcoming swim to raise money for Cure Parkinson’s click on the link – Definitely worth your time!
Here are Julio’s comments from his Spirit award win.
“I was diagnosed with Parkinson’s just before my 60th birthday, and yes, it was a shock and I thought it was a life sentence… but when I asked my doctor what I could do, she described my current lifestyle anyway…. Exercise, yoga, meditation, nutrition, etc. Then I started rooting around and found the story of John Pepper in South Africa through that amazing book by Norman Doidge, “The Brain’s way of healing”. So I started power walking as opposed to just walking, then I discovered PD Warrior and more of the related literature of exercise and Parkinson’s.
I was referred to the wonderful Vicky Knight and signed up for the 10 Week Challenge with the one to one sessions added and I haven’t looked back! I’ve had my PD Warrior routine refined gradually by Vicky in the last weeks so as to fit into my busy exercise routine, and that has been invaluable. The aim has been to blend it in so it is not something extra, but a daily part of my routine. These days I’m waking at 6:39 (don’t ask! Haha), I go out to the garden, in any weather and I hose myself down with cold water. When it was winter here it’s been anything but trivial, some days involving showering in the snow and at others flexing the hose to loosen the ice inside or pouring boiling water on it to melt the ice.
I’m also preparing for a swim in aid of Cure Parkinson’s, from Gosport, near Portsmouth on the southern English coast across to Ryde on the Isle of Wight, organised by Vicky Knight and Peter Burns of Positively Parkinson’s called The Big Splash. They tell me is only 5kms but Google maps tells me it’s about 6kms!

Further information, updates, social media and donations regarding the Big Splash can be found on the following websites: 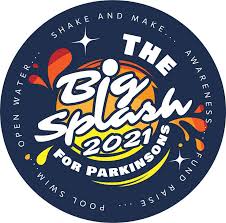 The Positively Parkinson’s Challenge 2021 is “The Big Splash”, a swimming campaign to raise awareness about the benefits of exercise, a wider understanding of Parkinson’s…